sebastians-ao@st-sebastians.liverpool.sch.uk
U Email
T Find Us

The Parish of St Oswald's and St Sebastian's 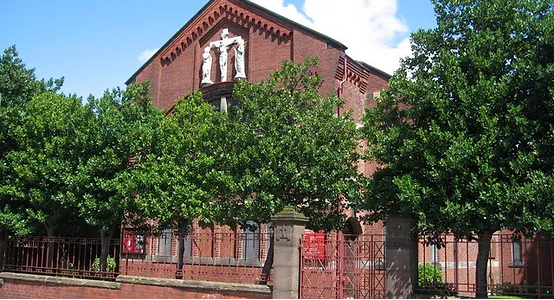 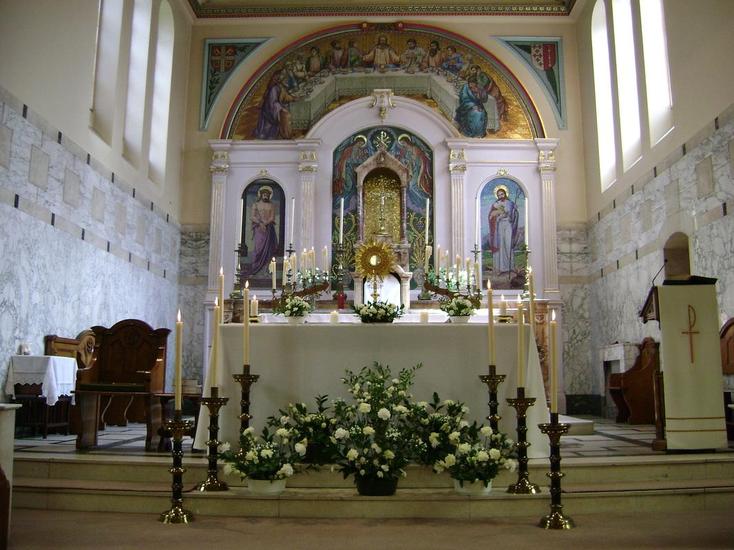 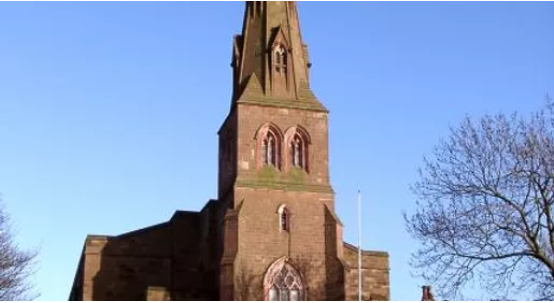 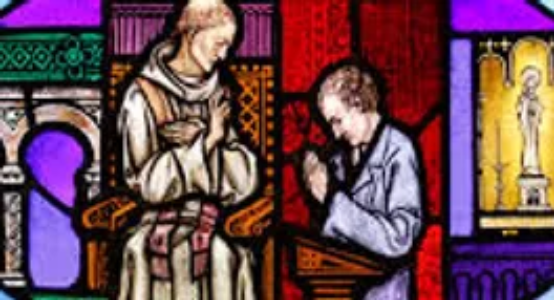 St Sebastian's belongs to the parish of St Oswald's and we work closely with Fr. Liam Collister our Parish Priest who welcomes us into our church, a place where we feel at home and close to God. He guides us through our Sacramental preparations and supports us in the teaching of the revised scheme of work (Come and See) introduced by Liverpool Archdiocese.

Our faith is celebrated with the parish community of St Sebastian's termly when classes from across the Federation join together sharing in morning mass.

After a meeting of the Archdiocese Trustees, we have been given the very good news that the works will go ahead on the roof and gable wall of Saint Sebastian's Church sometime in the near future.

We do not have a timescale for the works yet, but as soon as we do it will be published.

The various Church assets will be used to help with the cost of the work, and will have a knock on effect in the use of the buildings and the land.

This information was written by Mary Borg, a Parishioner, and is fully available on http://www.sebosw.org/history-of-st-sebastians.html

Until 1918 England was regarded as a 'Mission Country' (an aftermath of the Reformation) and priests were appointed as 'Priests in Charge' of a Mission. The first such for St Sebastian's was Father Edmund Clark (see Pariah Priests).

The opening of the church was impressive. The Foundation stone being laid by Archbishop Whiteside on Low Sunday 1913. The opening was on the Feast of St Sebastian, January 20, 1916. The Mass was sung by Cardinal Logue, Primate of All Ireland, assisted by Archbishop Whiteside. Father Robert Lowe of Milltown Park, Dublin, preached. The band of the 8th Irish Batallion of the Liverpool King's Regiment played during the opening celebration.

At the turn of the century Fairfield was a middle-class residential area. Holly Road, where Fairfield Hall stood, and Laurel Road, had only recently come within the boudaries of the City of Liverpool. Many affluent professional and commercial families lived in the area. These included the Noblett's, of Everton toffee fame, the Norris's an old Liverpool family, both in Laurel Road. In Stanley Street were the Dukes family. Two of their sons became priests, three daughters Nuns. It was a Mr. Johnson of Fairfield, who invited and encoraged the Sisters of Adoration Reparatrice in founding their convent in Edge Lane.

Sadly, the Community moved to Chester about five years ago. These families and numerous others were more than generous in their support of the parish.

Father Edmund Clark was the first 'Priest-in-Charge', in 1904. He lived at 19 Onslow Road until 18 Lilley Road was bought for use as a presbytery. He founded the parish and had the task of persuading Catholics attending other churches and schools to come to their own church and school. He opened the school in 1909, started the Altar Society and outdoor collections, and founded the St Vincent de Paul Society in 1910. In 1918 he was appointed parish priest of Our Lady Star of the Sea, St Annes-on-Sea. Later appointed a Canon, he died there on November 22, 1942.

Father Edward Gorman V.F. (Vicar Forayne) and later Canon, was a former professor at Upholland. Appointed to the parish in 1919 he remained until his death in 1934. He is still remembered by older parishioners, who recall him as a dedicated hardworking priest, deeply interested in education. He developed all parish activities, particularly the debating team, and was responsible for the first new school which opened in 1928.

Father Joseph A. Wareing, later Canon, became parish priest in 1934. Secretary to Archbishop Whiteside for a time, he continued as such with Archbishop Keating until 1927. He was dedicated to the Liturgy and to protocol, and was a shrewd administrator. He ruled the parish firmly for 35 years, celebrating the Golden Jubilee of his ordination there. He retired to live in Preston, where he died on November 8 1978.

Father Gerald Reynolds succeeded Canon Wareing in July 1969. His first task was to replace the old presbytery with a modern building. The large Victorian house, badly shaken by the 1941 bombing, was demolished. The new presbytery was not a charge upon the parish, the costs came from funds which Canon Wareing had invested in the diocese.

Father Reynolds was Chairman of Governors of Cardinal Newman Secondary School, and closely involved in reorganisation of the schools for comprehensive education. St Sebastian's pupils now go on to Broughton Hall and Cardinal Heenan High Schools. He also directed the building of the present primary school and had the church re-ordered for the new style of liturgy.

Father Patrick Kelly was appointed parish priest of St Sebastian's in September 1982. He was an ideal appointment for this era when the laity are being urged to take a more active part in the apostolic life of the Church. His appeal to younger parishioners to take an interest in the parish apostolate has not fallen on deaf ears. He is renowned for his eloquence at weddings and funerals, and his kindness to non-Catholics attending such functions. His influence has created an active corps of church workers, including Eucharistic Ministers, Readers, and parishioners who help parents and children with First Holy Communion, Confirmation and Baptism programmes. He visits regularly in the parish.

The emphasis was on prayer and concern for men from the parish serving in the Armed Forces in France, Belgium, the Dardanelles, on the high seas and in the air: for those who died or were injured, and for their families.

Prayers were offered regularly at Sunday Masses for men who had 'lost their lives on land and sea.' A 1915 notice read out was "A Solemn Requium Mass will be sung by the Rt. Rev. Mgr. Gray on Thursday Next at 10am. for the repose of the souls of the following members of the Congregation ..."
After the war parishioners subscribed for the marble altar rails containing memorial tablets listing ranks and names of those who died in battle. Destroyed in the 1941 blitz, they were replaced exactly as they had been.

In September 1939, 182 pupils equipped with identity cards and gas masks, and supported by teachers and helpers left St Sebastian's for Penmaenmawr, North Wales. 'The Evacuees' as they were called, were billeted with Welsh families. Junior and Infant children attended Capeulo Council School. Over elevens attended the Central School at Penmaenmawr. Teaching was on a two-shift basis, i.e. one week mornings, the next afternoons. Teachers with the children were: Miss G. Roberts, headmistress, Mr. James Doran, Miss M. McArdle, Mrs. H. Greening, Miss E. Dunne, Miss M. Chambers. Regular medical and dental care was given, gas masks checked regularly. Some children were taken home by parents soon after evacuation. The school log book for Capeulo ends on January 6, 1942.

On September 18, 1941, German bombers dropped a stick of six bombs over Fairfield, doubtless aiming for the nearby Edge Hill Railway Goods Yard. Just seven minutes after the closing of the Quarant Ore (forty hours) with Solemn Benediction, a bomb, the first of the six, fell through the roof of St Sebastian's church, exploding at the Sanctuary gates.

It ripped up the floor, standing it on end, smashed to atoms the marble altar rails containing the memorial tablets to men who died in the 1914-18 War. The solid marble pulpit vanished, the altar was badly damaged, but not beyond repair. The tabernacle was intact, the crusifix moved only a sixteenth of an inch; there was no damage to the mosaic of the Last Supper over the high altar. The statues did not move.

By a miracle, worshippers in the church for the ending of the Forty Hours, on hearing the air raid warning wail had hastened to the school shelter. Canon Wareing had intentionally shortened the service because of the circumstances. After seeing that all was well the Canon and Monsignor (then Father) McDonnell took refuge in the basement beneath the presbytery. They were hurriedly called out by a warning that there was an unexploded bomb in the garden in front of the prebytery. The Canon found shelter with Monsignor Tom Turner. Monsignor McDonnell with the Sisters of the Little Ones.

Until Holy Week 1941 Edge Lane Convent was used for Mass. Then it too was severely damaged by bombs. Until the church was repaired in August 1942 mass was said in the parish hall. It was 1949 before the church was fully restored.

Unfortunately not the ones with chocolate chips.

Some cookies are necessary in order to make this website function correctly. These are set by default and whilst you can block or delete them by changing your browser settings, some functionality such as being able to log in to the website will not work if you do this. The necessary cookies set on this website are as follows:

Cookies that are not necessary to make the website work, but which enable additional functionality, can also be set. By default these cookies are disabled, but you can choose to enable them below: